My sister and I started out at Mother Juice today.  It’s a juice/smoothie bar on a truck!

My sister picked the #3 smoothie and I picked the #3 juice, which was terribly STUPID of me.  My attention was caught by the pineapple and watermelon and orange.  I didn’t notice at all that carrot was also listed.  I don’t hate carrots but I’m mildly allergic to raw carrots.  Lucky for me, my sister is nice enough to swap drinks with me.

I apologize that I didn’t take a photo before we started to drink them.  By the time we sat down, we had already walked around Copley Square a couple of times.  We were quite warm and thirsty by then!

The juice drink was good.  I dared a sip.  However, I think that carrot juice is a very dominant flavor.  It’s hard to balance it.  The pineapple, watermelon and orange flavors definitely took a back seat.  Basically, it was a healthy tasting, sweet carrot drink.  Some people may like it, some may not.  I liked it but I shouldn’t be drinking it anyway.

The smoothie was definitely the winner of the two for me.  It wasn’t too banana-y, which I think is often the case.  In fact, no single ingredient overpowered the others.  It was just a refreshing and enjoyable green smoothie overall.

Lunch was supposed to be the Mei Mei Street Kitchen truck, but we couldn’t find it and neither of us have smartphones.  (It turned out that my sister wrote down the wrong location.)  So, we went to the Momogoose truck instead.

First impression?  The price is right and the portion is perfect. 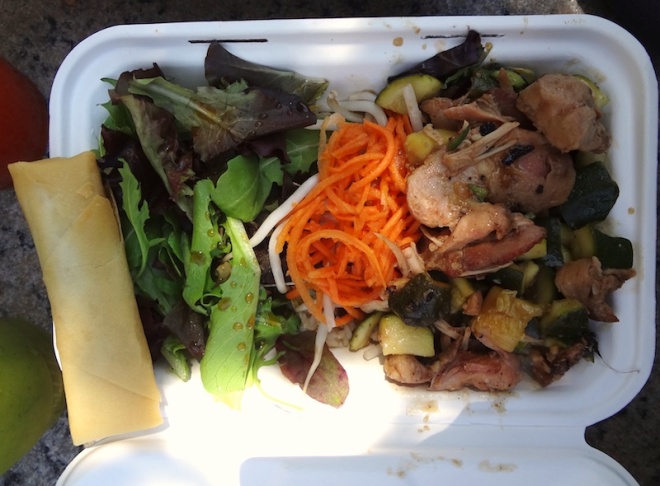 My sister got the grilled chicken over brown rice.  She wanted to get an order of the ravioli but they were all out so she ended up with a crispy roll.  I got the bulbogi beef over rice noodles… however, I was given egg noodles and didn’t notice until too late.  D’oh!

I liked the grilled chicken better of the two.  There was a nice smokey flavor on the chicken.  The bulgogi beef was fine but I felt like it was a tad too sweet the more I ate.  The portions were perfect.  They don’t skimp on meat, or on the rice/noodles.  They also give you a small portion of salad so that you don’t feel like you’ve neglected your veggies.

As for the crispy roll, I didn’t care for it.  I don’t know what my sister’s opinion is on the matter.  I guess I could ask her as she’s just sitting on the other side of the room from me.

(Her answer:  It was okay, but it wasn’t awesome.  I wish they had the ravioli.)

The Momogoose menu has a lot to offer.  You get your pick of ramen, pho, sandwiches or rice.  And then, you have your pick of protein.  There’s also a daily special that’s $9, I think?  Overall, it’s a great place to hit up if you come across it.