I got excited when I first found out that Yvette Van Boven was releasing a new cookbook in the US.  I had the pleasure of meeting her about a year ago during her book tour for Home Made Christmas. She and her husband Oof are some of the nicest people you’ll ever meet.  I really believe that her endearing personality comes across in her cookbooks: in the little recipe sketch drawings, and in the little stories she writes. I often skip recipe introduction when I flip through a cookbook, but I won’t skip hers.

Filo pie recipe by @yvettevanboven came from her new book. Comes out in a couple of days. Review on the blog ❤

The latest book (available Oct. 15th) by Van Boven is “Home Made In The Oven: Truly Easy, Comforting Recipes For Baking, Broiling, And Roasting.”  There’s over 80 recipes, I believe, all meant to be cooked in the oven. The book is simply broken down by:

Each of these sections have recipes that are categorized by month, but don’t assume there’s an equal amount of recipes for each month. There are five January recipes in the Vegetables chapter, and nothing for July or August.  To be fair, those are hot months in the Northern Hemisphere and therefore turning on the oven is the last thing anyone wants to do. The reality is there are only three July recipes and one August recipe in the whole book.

Each recipe comes with a sketch of how to make it, and a little photo in the top right hand corner.  And I do mean little.  Without grabbing a ruler, I estimate the photos are a little more than an inch by an inch and a half.  The sketches are cute, and the recipes are fairly simple and straightforward (that does not equate to boring).

Here are the recipes that I’m most interested in making:

For now though, I made the veggie filo pie (which is technically a May recipe even though it’s currently October – but it’s fine!  There’s nothing very seasonal in this dish). I’ve never bothered making a filo pie on my own before so recipe testing seemed as good a time as any.  It has leeks, garlic, spinach, chickpeas, egg, ricotta, nutmeg, smoked paprika, and crumbled feta. You make the filling, pile some filo dough strategically in a pan, and then bake.

It was so easy to make!  It’s not unhealthy either, since Van Boven’s point to this dish is to eat more vegetables.

The filling for the filo pie i made. Will make again this weekend because why not?

Made a phyllo pie of ricotta, chickpeas, spinach, onion, nutmeg, and smoked paprika. Recipe from @yvettevanboven

It seems pretty easy to customize.  Since I have some leftover ingredients, I plan on making a second time this weekend.  But I’m tempted to change the spices. While I love nutmeg and smoked paprika, I felt like nutmeg was the dominant flavor.  I have an overwhelming urge to try curry powder or ras el hanout? I haven’t decided yet. (Your comments will be considered if you have other ideas.)

In general, the whole book is very approachable.  I can’t really think of a recipe in it that’s too intimidating.  If you’re picky about high quality glossy cookbook photos, then maybe this book isn’t for you, but I think everyone else will enjoy it through and through.

Disclaimer – I kindly received this book from Abrams for this review.  I’m not getting paid for this post. The views and opinions expressed are purely my own.
Reference Links:

Ok, that’s a bit of an exaggeration.  I got a new cookbook in the mail.  This was one that I was really hoping to get my hands on.

First of all, I feel like I need a backstory.  I have a friend who holds an annual soup swap.  Well, he almost always has one.  A couple of times, he didn’t.  And a couple of times, I couldn’t make it.  But the point is that I have attended an event which required me to prepare 6 quarts of soup.  I don’t remember when I started going, but I was able to find a post on it from 2012.

Finding recipes that yield 6 quarts is a challenge.  Often times, it means multiplying ingredients, or sometimes making 4 quarts of one flavor and then 2 quarts of another flavor.  So, I was looking forward to getting my hands on The Soup Club Cookbook by Courtney Allison, Tina Carr, Caroline Laskow, Julie Peacock.  (Ok, I might admit that the cover with Weck jars drew me in because I think Weck jars are ridiculously cute.) 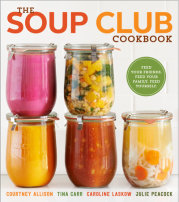 All the recipes in the book yield 8 quarts of soup.  Yup, 8 QUARTS.  First impression?  There’s a good mix of flavors and textures.  The chapters are done by “types”: broth, beans, purees, hearty, chilled, fish, and meat.  There’s also a small chapter for salad (in case you’re a soup and salad kind of person) and a chapter for bread (if you preferred combination is soup and bread).  The last chapters are an odd assortment of snack recipes and non-soup recipes (non-soup recipes generally serves 8).

The soups that I really want to make are 1) chickpea, roasted squash, and farro soup, 2) winter minestrone, and 3) mushroom and cashew cream soup.  Amusingly enough, I don’t think the soup swap is happening this year.  So far, I’ve only made the carrot coconut soup because it was really easy to scale it down to about 2.5 quarts.  (I divided everything by 3.)  It’s good.  It was simple to put together too.  However, I’m already tempted to mess around with the recipe to suit my flavor preferences.  (The main flavors were coconut milk, carrots, and ginger.  I’m just tired of coconut milk/ginger and ginger/carrot.)

crappy photographic evidence that soup was worked on

To make the other recipes, I’m going to have to scale down again.  Or maybe convince a couple of my friends that we need to cook together and split the soup.  Or, maybe give in and hold a soup club/soup swap event of my own (Ha!  A bit unlikely as I am a lazy hostess) .

Other random comment about the cookbook, I think that people who prefer visuals to text will be happy with it.  It’s not overloaded with pictures, but there are plenty of photos and doodles throughout the book.

Disclaimer – I received this book from Blogging for Books for this review.  I have not been paid for this post.  I just really wanted this book.