The last meal I had was chicken cacciatore with mushrooms and bell peppers, spaghetti squash with fresh basil pesto, and sauteed eggplant with basil. It was not a bad meal to end my run with FD.  For some reason, I have never thought to serve spaghetti squash with pesto.  It worked pretty well, which is quite the thing for me to say.   I think the more recognized pairing of spaghetti squash with red sauce is fairly abhorrent.  Don’t give me squash and make me pretend it’s pasta.  But I guess since pesto is a lighter texture with a brighter herb flavor that it pairs better with squash.  As for the eggplant, I couldn’t taste any basil.  It was just sauteed eggplant as far as I was concerned.  The chicken was, for a second day in a row, not dried out.  So, +1 point. 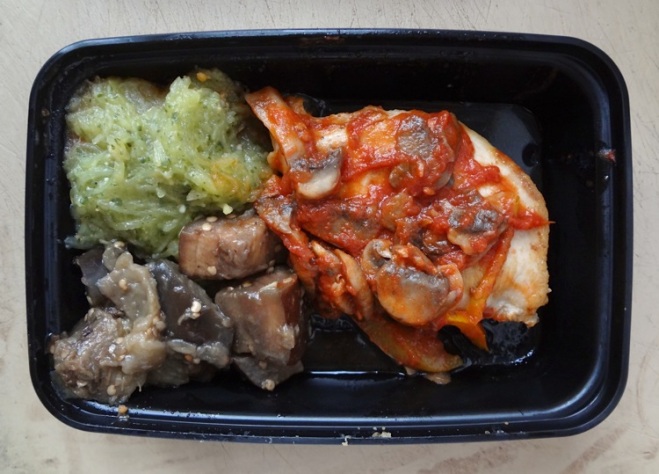 END_OF_DOCUMENT_TOKEN_TO_BE_REPLACED

Almost at the end!  Today was supposed to be my last day, but I still have one little container of food in my fridge.

The Fresh Diet knew that I didn’t have any pending orders in their system.  This morning when I went to pick up my food, I was greeting by a big green FD box instead of the thick insulated bags I had been accustomed to. 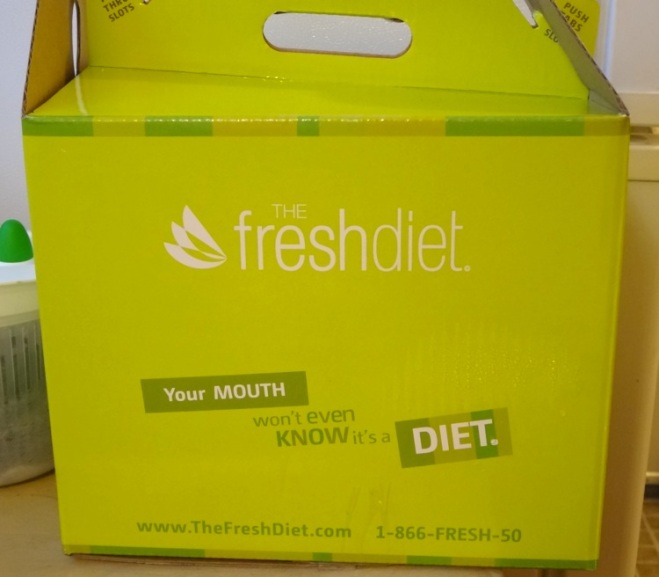 END_OF_DOCUMENT_TOKEN_TO_BE_REPLACED

Breakfast – Asparagus, basil and mozzarella egg bake with pineapples.  There was not nearly enough basil, in my opinion.  The fragrance was there, but it looks like they were crushed into tiny specks.  It’s a shame because I love basil.  Perhaps my slice of egg bake just didn’t end up with enough.  Still, it gets +1 point, because there were no surprises here. 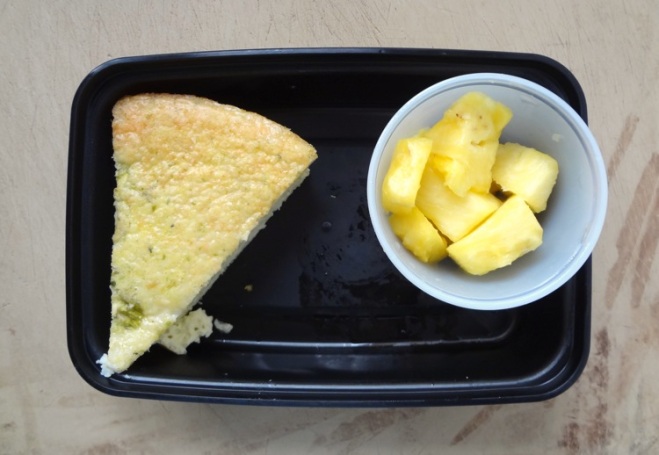 END_OF_DOCUMENT_TOKEN_TO_BE_REPLACED

Breakfast – plum stuffed honey wheat french toast with peaches and strawberry ricotta. +1 point. I wanted to give this zero points but I think it was mostly because I don’t think french toast should try to be healthy. In my world, french toast should be made with delicious challah bread. I also wanted more maple syrup. I didn’t get any on the side this time. My french toast was already “dressed”. Also, I seem to be weirded out by the idea of having ricotta on anything that isn’t lasagna. All of my issues though had nothing to do with the dish itself, so I refrained from penalizing it. 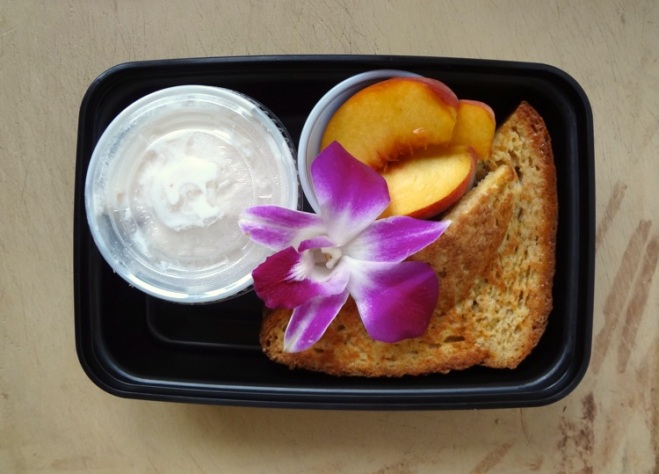 END_OF_DOCUMENT_TOKEN_TO_BE_REPLACED

Breakfast was oatmeal with wheatberries, raisins, and oatmeal.  I would have given this +1 but honestly it wasn’t as delicious to me as the oatmeal with coconut and pineapples that I had on day 1.  It was less gluey but I felt like the flavor was lacking a little.  But, perhaps, it is more the fact that I thought I tasted ginger powder in it, and I think cinnamon is more the way to go with breakfast.  Since I’ve decided that I’ll never make this on my own, I’ll give it zero points. 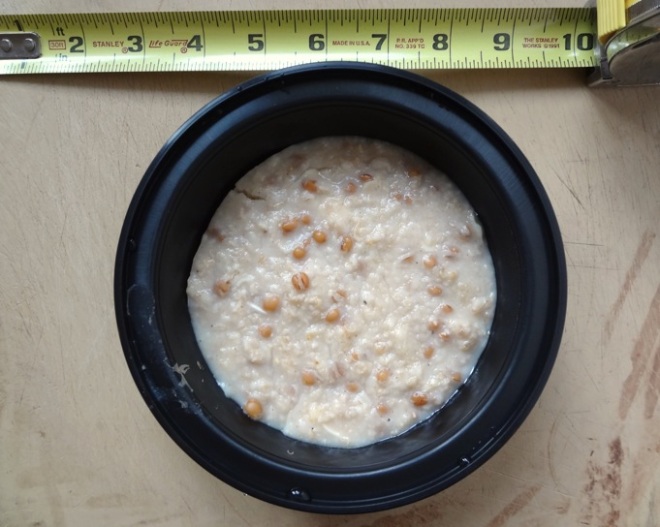 On the brighter side, I was fairly content with my lunch fare: a cheese steak wrap with mushroom.  +1 easily.  It is also a very boring picture.  haha. 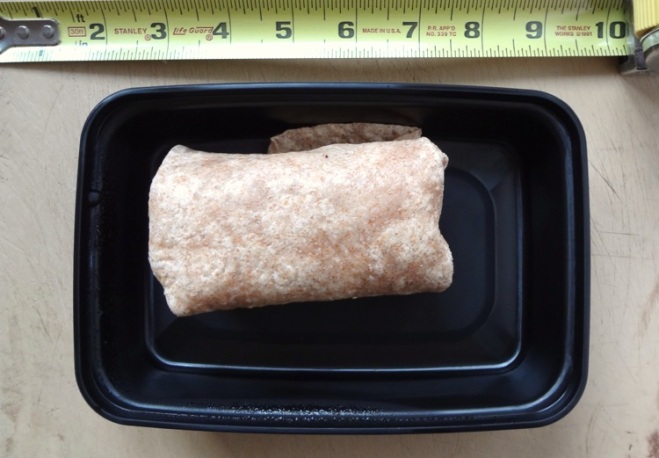 END_OF_DOCUMENT_TOKEN_TO_BE_REPLACED

Day 3 starts with whole wheat blueberry waffles with cottage cheese and blueberries.  I’m not a huge cottage cheese fan, but I like it better now than I did when I was younger.  I say waffles, but the serving size is really one waffle cut in half.  The cottage cheese was about 1/4 cup, maybe 1/3?  I forgot to look more closely. Breakfast easily wins +1 point.  It  turns out that I like cottage cheese mixed with maple syrup on top of the waffles.  Cottage cheese has such a mild flavor that it’s basically maple syrup flavored once the syrup is mixed it.  I didn’t even need to use all the maple syrup provided.  I think this will make a good breakfast as the weather continues to turn cooler here in Greater Boston, and I will need to give up my avocado breakfasts.  (Avocados do not ripen well in a cold New England house.  This is what I have learned from last winter.) 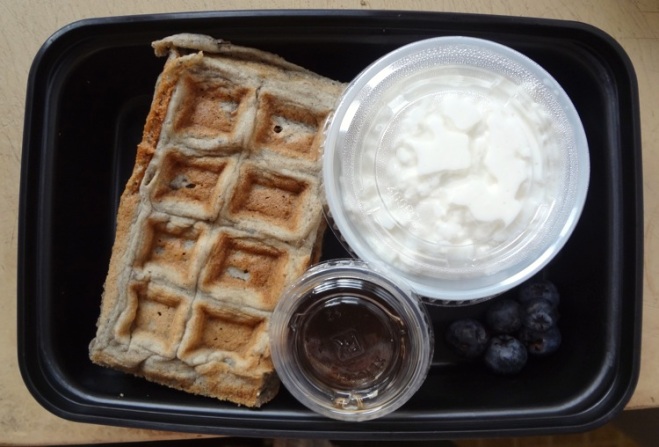 END_OF_DOCUMENT_TOKEN_TO_BE_REPLACED

I have learned my lesson quickly. I am not someone who can live on 1200-1400 calories a day, even if that food is being cooked for me.  Since I’m not actually on a diet, there’s no reason for me to suffer through. I firmly believe in eating enough to feel satisfied. And as I have grown wiser with age, I try to eat balanced meals. It’s still a skill I’m learning, but it’s what I believe in first and foremost. So, as I am trying out the Fresh Diet, I am also supplementing my meals as I see fit.

Breakfast today was a wedge of a cheese and bell pepper egg bake with a side of pineapples.  The omelet, texture-wise, was interesting.  I reminded me of the old days when my mom would make a steamed egg dish made of nothing more than eggs and water, mixed well.  (We used to top it with oyster sauce.  Do any other Asian families do this?  Or was it something my mom made up?)  It looks dense but tastes light.  Flavor-wise, it was nothing unexpected and it was pretty straightforward.  I will admit that I ate it as a snack at 10:30a.  My actual breakfast was half an avocado mashed on some ak-mak crackers (it has been my go-to breakfast all summer).  Good thing too, if you ask me.  Strange truth – not only does oatmeal not stay my appetite in the morning, but eggs don’t either.  There was no way in hell that tiny wedge of omelet was going to tide me over from 7a to 10:30a.  (10:30a is my snack time.  My tummy is like a clock when I’m at work.)    Breakfast gets +1 point. 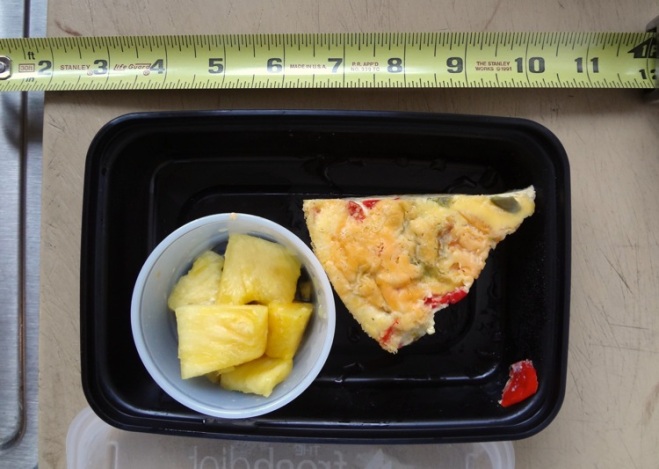 END_OF_DOCUMENT_TOKEN_TO_BE_REPLACED

I had never heard of the The Fresh Diet until the BFF brought it into conversation one day, a few months back. And then, it felt like I was seeing it every where online – Gilt Boston, probably The Daily Candy, maybe Living Social… you get the idea.

It wasn’t the first “handmade and delivered to your door” service that I had seen (that honor goes to Macro-Mediterranean.com) but it did sound awfully nice! Take a break from cooking? Not have to worry about whether I am eating a balanced meal? Sure, ok!

END_OF_DOCUMENT_TOKEN_TO_BE_REPLACED

I have moments when I can’t resist trying things just for the sake of curiosity.

Last month, there was a Groupon-like thing for thefreshdiet.com.  Since I had never ordered from the sale site in question before, I was also being offered an extra discount on my first purchase.  Although I am not on a diet (I have never, ever been on a diet, and have no real plans to), I wanted to see if The Fresh Diet lived up to the hype.  After all the discounts, I am effectively paying $15 per day for seven days of food.  Home cooking is cheaper, but $15 for an entire day of meals isn’t too bad.  And, dammit, I’m just really curious.

My experiment starts on September 10th, and will run for seven business days.  I opted not to receive any deliveries on the weekend.  I plan to take pictures and review thoroughly.

Am I the only person crazy enough to do this?  haha.

I’ve finally been visiting the farmer’s markets. Honestly though, I’ve just been there to pick up some handmade bread.

I’ve been wanting to visit Clear Flour in Brookline for quite some time now. A couple of years ago I took a bread baking class at the Cambridge Center for Adult Education. The instructor was a petite woman with dark hair (vaguely reminding me of Amy Lee of Evanescence) who was a private caterer named Leslee. (I think that’s how she spelled her name… I just remembered that she spelled it differently from the usual “leslie”) Anyway, she explained her bread expertise background which was as a baker at Clear Flour. Listening to her talk about the bakery had me hooked. Unfortunately, the truth of the matter is that Brookline is not convenient for me at all.
So, I’m very thankful that they decided to join a couple of farmers’ markets this year.

The first time around, I purchased a half loaf of Pain De Mie ($3.55) and a loaf of Onion Focaccia ($3). The pain de mie was a HUGE loaf – a half loaf is probably the same size of a loaf of machine made bread at the market and about the same price. Why on earth wouldn’t I buy it? It’s a nice white bread and very soft with the kind of texture I wish I knew how to make at home. I was also very impressed that the breads were still warm when I bought them.

In some of the photos, I have a measuring tape just to give you and idea of the bread size. 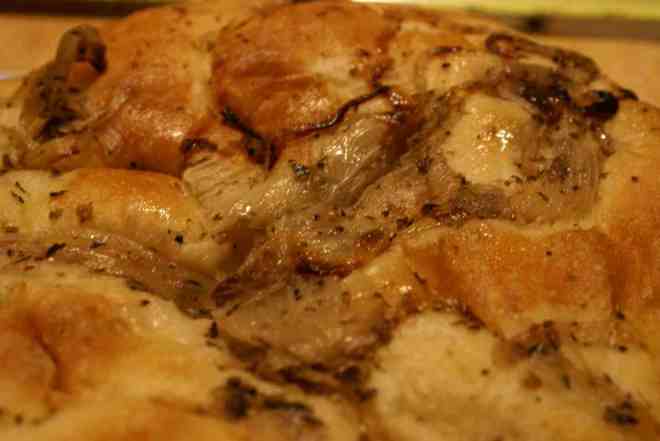 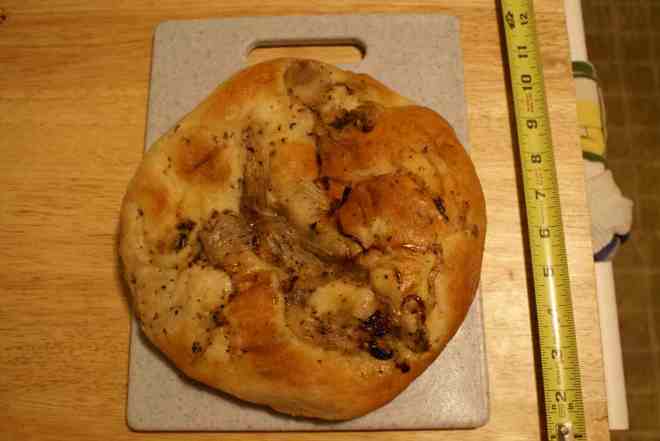 The second time I visited the farmers’ markets, I got half a loaf of buckwheat with walnuts ($2.15) and half a loaf of whole wheat ($2.25). The wheat loaves are no where near as giant as the pain de mie (btw, the half loaf of pain de mie lasted pretty much one week exactly before it was gone) but I didn’t want to just buy one whole loaf to try. I really wanted the buckwheat one but feared I wouldn’t like it. Plus, whole wheat is a good everyday bread.

Well, I tried a slice of both when I got home and I was surprised. I really like the buckwheat and not the whole wheat at all. Both taste like they used sourdough starters. However, the buckwheat loaf was much milder in flavor. I didn’t even find the walnuts to be distracting (and there weren’t too many nuts). The whole wheat one was much too sour for my liking. Ick. I think I’m going to have to eat that one with jam or peanut butter. 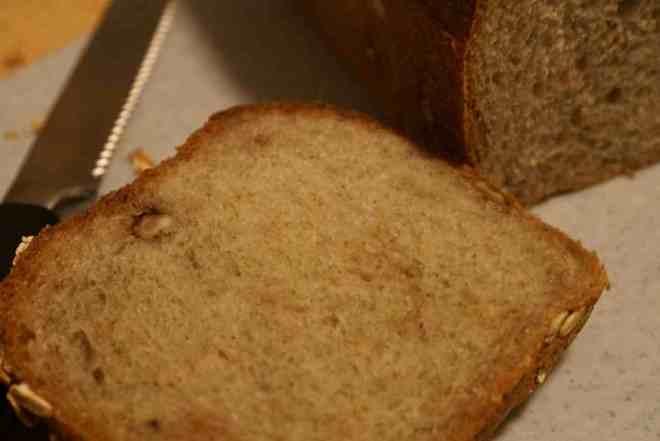 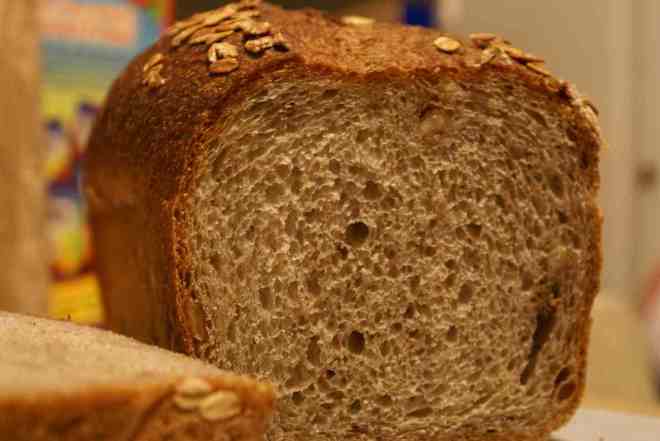 The buckwheat loaf is a standard size loaf – about 9×4 or there abouts.

Anyway, I can safely say that so far I love Clear Flour.  It’s affordable and perfect for those days when I’m too lazy to make my own bread (which is almost all of the time).  Looking at their website, there are a lot of breads that are only made on some days of the week which I really would like to try.  I’ll have to make a special effort to get over to Brookline.